One of the highlights of our trip was a visit to the Aare Gorge in the Hasli Valley of the Bernese Oberland. A section of the Aare river carves through the limestone ridge of Kirchet creating a channel between 1m and 30m wide. The gorge has been open to the public since 1889 and is accessed by a long walkway carved into the side of the ridge with short stretches of tunnel. The water is glacial blue and powerfully beautiful. 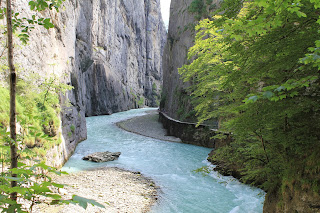 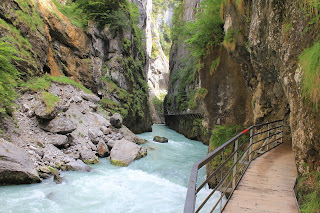 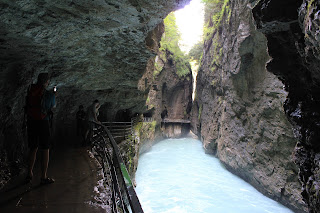 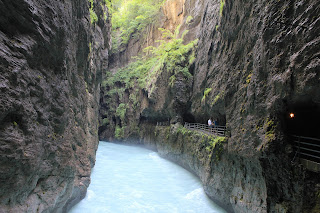 The gorge has several unusual features along it. A natural feature is the glacier mills, vertical shafts which acted as part of a glacier's internal "plumbing" system carrying meltwater down from the surface. The gorge is an indirect product of glaciation. 10 000 years ago, just as the Ice Age was coming to an end, torrential runoff water from melting glaciers eroded the deep narrow chasm through the limestone barrier. The gorge is only a mile long, but the cliffs on either side are 50m high, interrupted only by these mills.


Another unusual feature in the gorge is manmade. On the opposite side of the gorge from the walkways lie two underground caverns from WWII. This military installation was built at the end of 1940. The larger cavern was to be used as a dormitory for 185 officers and soldiers. All the technical equipment was installed in the smaller cavern. Offices, recreation room and dining rooms were installed in a stationary train in the tunnel. It is not known why, but the installations were never used and still exist, hidden and unused in the Kirchet cliffs. The caverns have wood-lined walls, heating, running water, flushing toilets and electricity!

Outside the caverns, carved into the cliff face is the Hasli Eagle, which adorns to official seal, banner and flag of the Haslital. When you get there and see the power of the river carving through the gorge, it makes you appreciate the genius of Swiss engineering. How on earth did they build something like that in that place? And why? It boggles the mind!