The Amazon Rainforest has 14,000 species of animals and 1,500 species of birds. While it's possible to see many of these on a trip to the jungle, it is very difficult to take pictures of them due to the dense trees and great camouflage which some of the jungle creatures have. Here is a selection of some of the animals we saw, cropped and a little blurry, but exciting for us nonetheless! 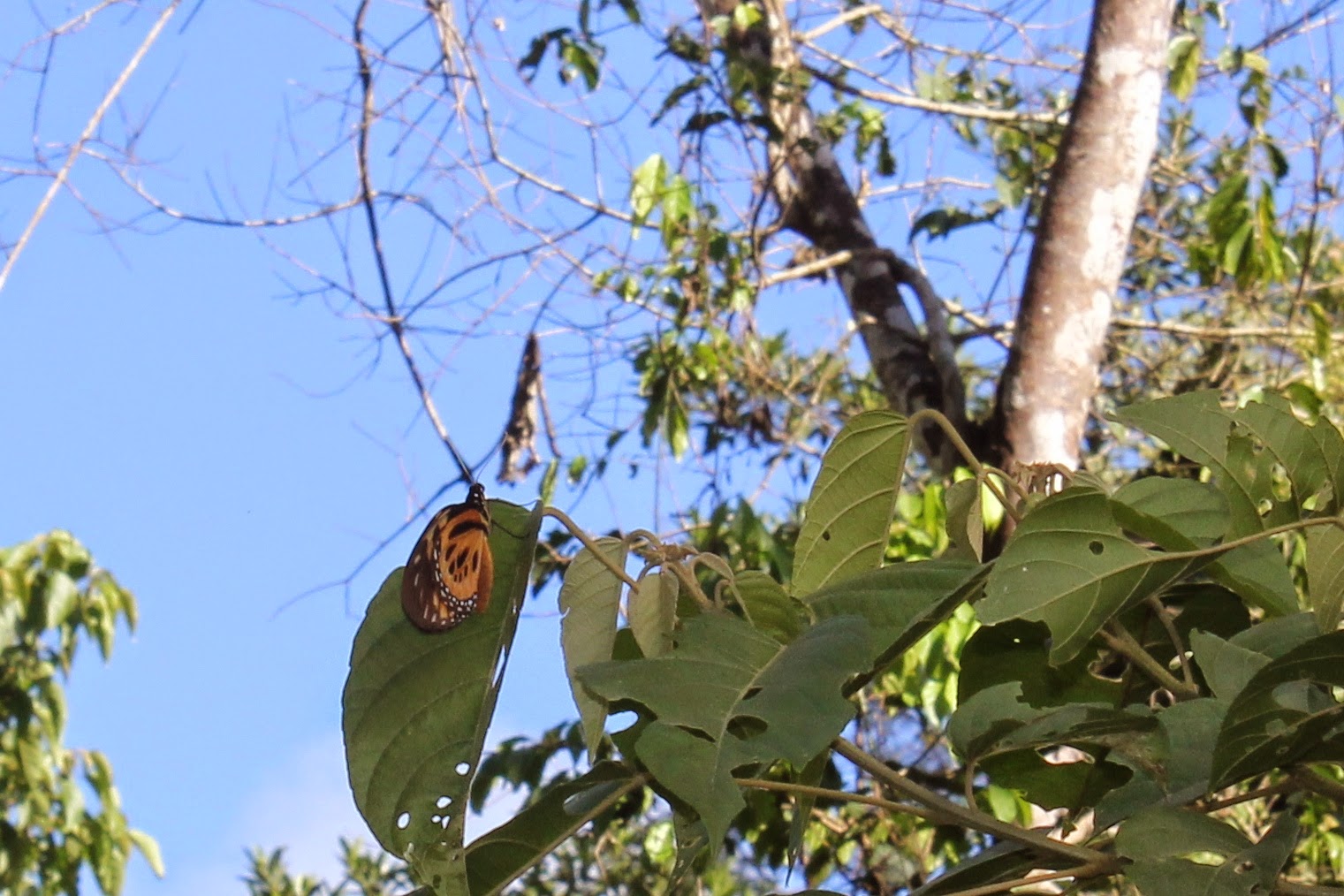 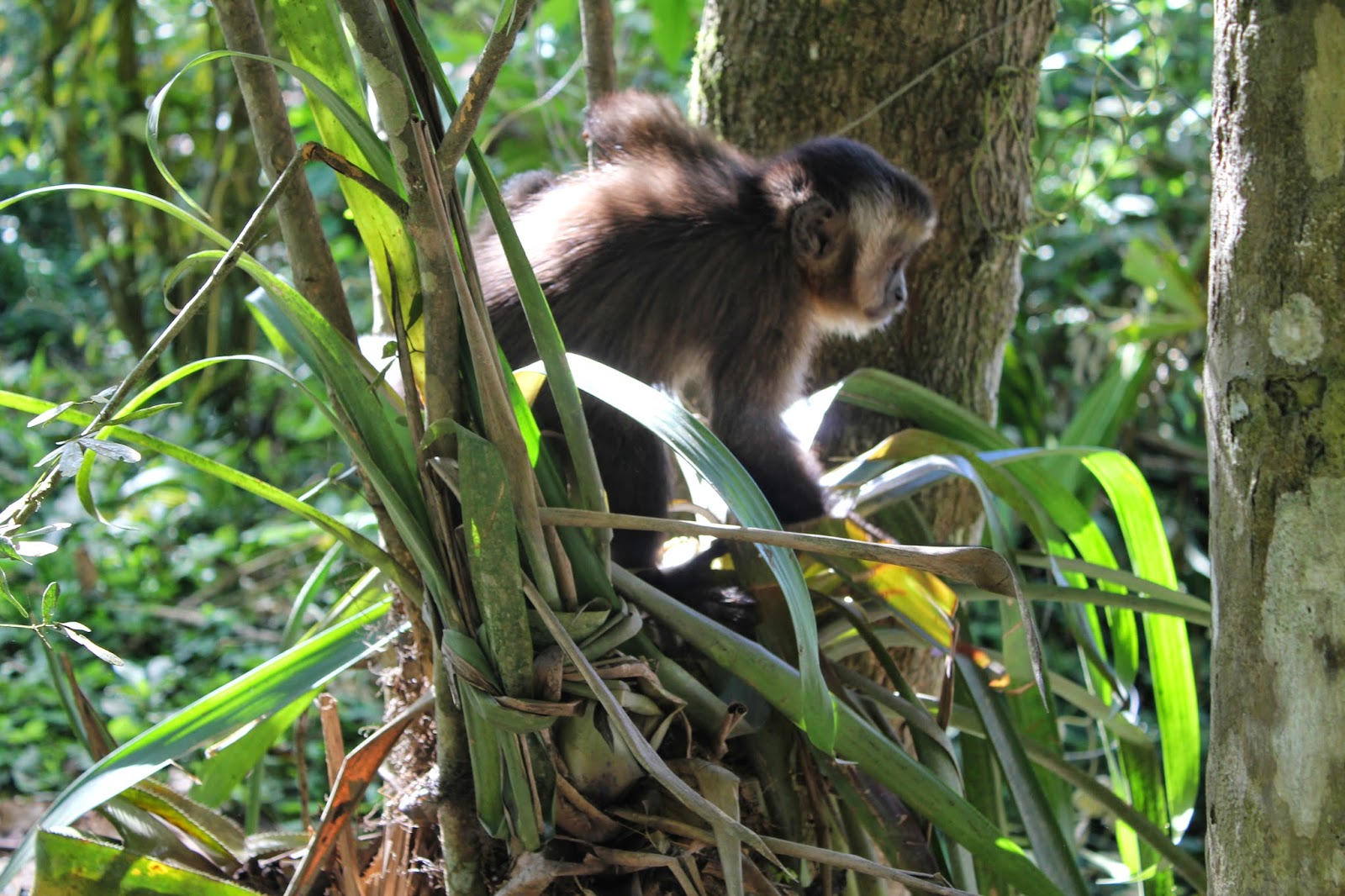 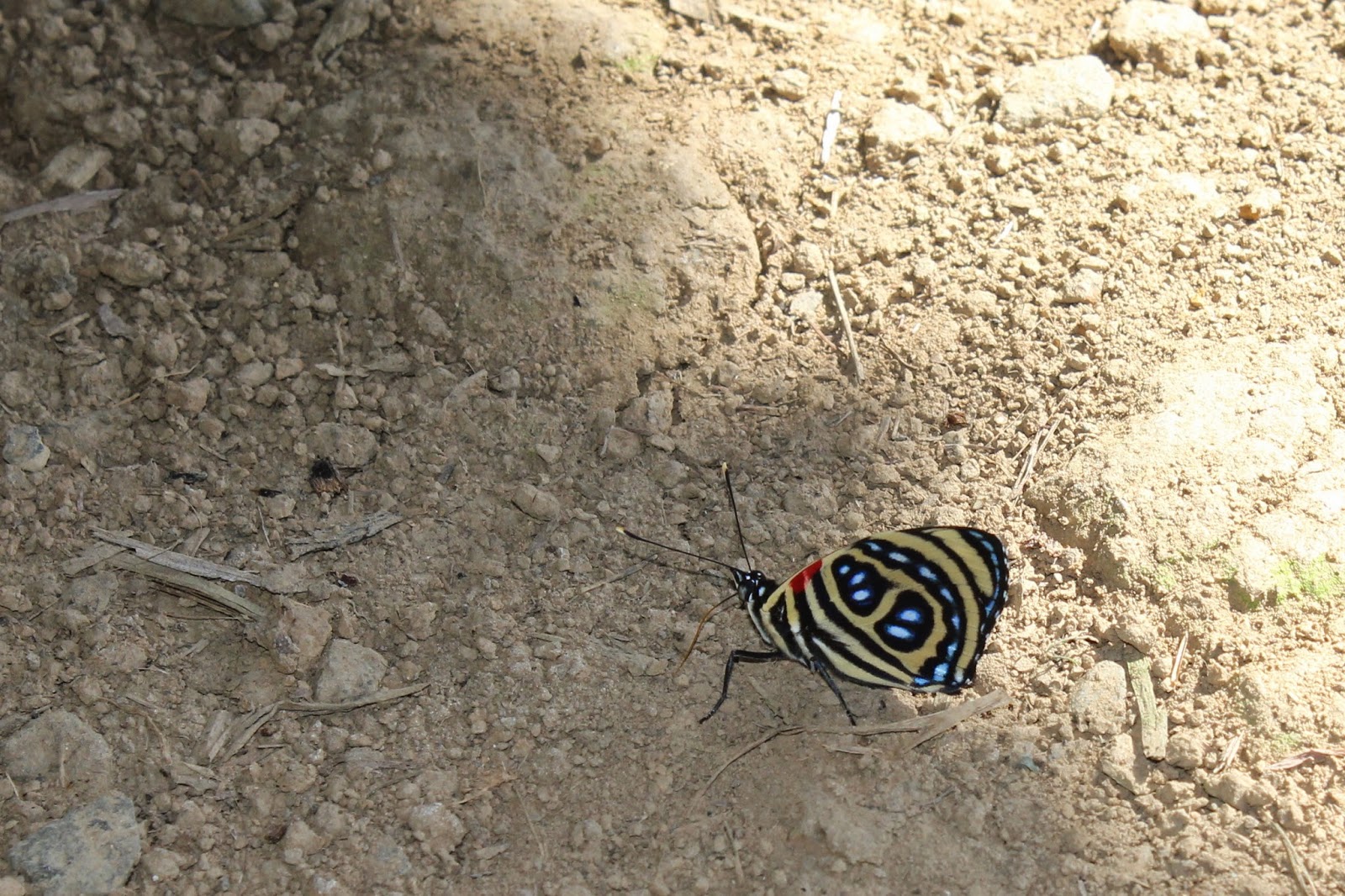 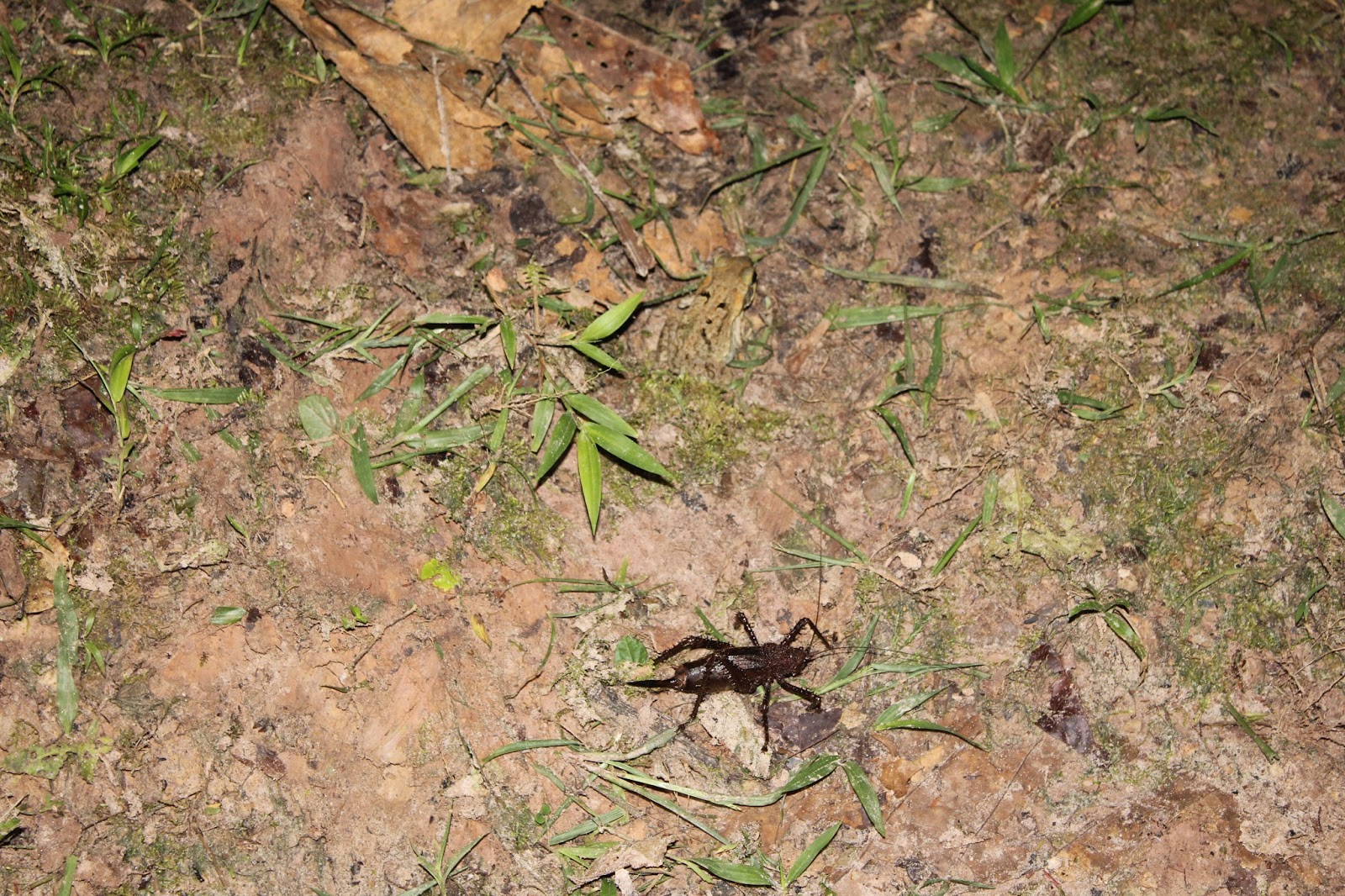 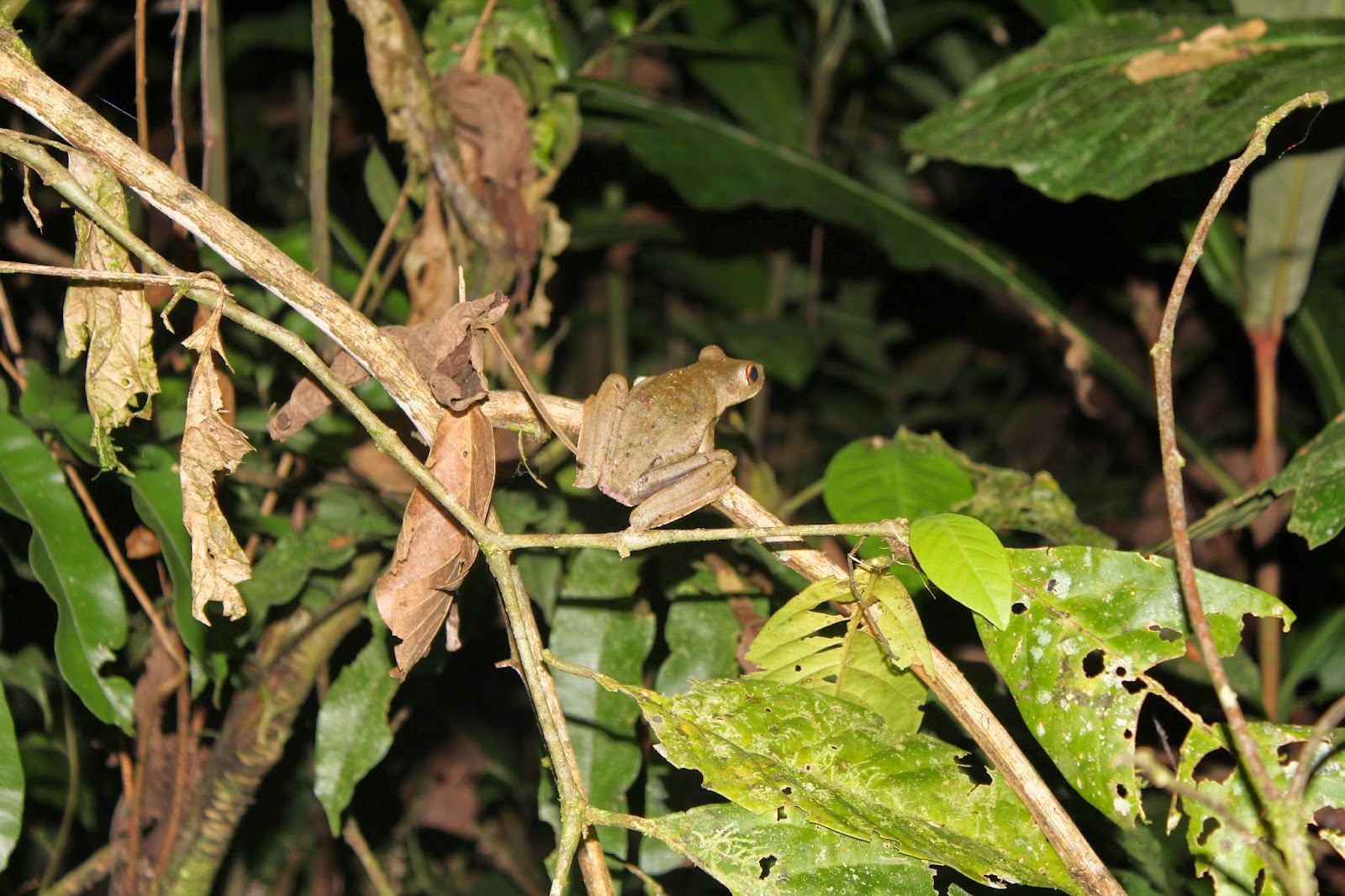 Here is a complete list of the birds and animals we saw:

We went on a tour to the Amazon Jungle, partly for the adventure and partly for me to see where Daniel had been running the previous week. The drive to the jungle took us through some Andean towns (the highest at 4,200m!) and past the pre-Inca burial site of the Lupaca people. We descended into the Cloud Forest in Parque Nacional Manu and I finally got a small taste of the heat and humidity which Daniel experienced.


When we entered the forest, we started looking out for jungle wildlife. Our guide - appropriately named Darwin - spotted some beautiful exotic birds and hauled out his telescope and bird book for us to identify the birds. We had a great sighting of Peru's national bird, the Andean Cock-of-the-rock. After a long day winding down into the forest, we had to cross a river on a zipline to get to our lodge for the first night.

On our second day we stopped at an animal rehabilitation centre which rescues jungle animals which have been held in captivity by the local people. We saw some very cute monkeys, a coati, wild pigs, parrots, a turtle and a caiman. Later we caught a boat up the Madre de Dios river, which is a tributary of the great Amazon River. We had a chance to swim in the river (no piranhas!) and float downstream to a small beach where we had lunch.


Our lodge for the second night - Paititi - was quite far downstream and we had to wade across part of the river in our gumboots because the level of the river was too low for the boat to get closer. From there we went on an adventure into the jungle to a small oxbow lake which we crossed on a crude balsa wood raft. The bird life around the lake was incredible and we added several new species to our list. We were also lucky enough to see some Dusky Titi Monkeys, one of the more timid species in the jungle.


On our last day in the rain forest, we went to the clay lick, a 50m high clay bank which attracts many of the parrots, macaws and parakeets in the jungle for their daily mineral fix. It was a quiet morning when we went, but we saw a few species between the trees. We had a lovely final breakfast on the banks of the river before heading back to civilisation.

Posted by Vanessa Walker at 22:22 No comments:

We visited the historic site of Machu Picchu, one of the New Seven Wonders of the World. It is situated on a ridge in the mountainous Urubamba Valley amidst dense vegetation and sheer slopes. The views over the ruins and valleys are absolutely marvellous and the feat of engineering required to build the estate is mind-boggling.

Machu Picchu comes from the the Quechua words machu which means 'old' and pikchu which means 'pyramid', 'mountain' or 'peak'. It is a 15th century Inca site which was built for the Inca emperor Pachacutec, who united the Inca Empire under the common language of Quechua.


Posted by Vanessa Walker at 21:14 No comments:

We caught a train on PeruRail to the small town of Aguas Calientes, which is the base for travelling to Machu Picchu. Aguas Calientes is the colloquial Spanish name for the town and it means "hot waters", a reference to the nearby thermal springs. It is mostly a tourist town now, with many restaurants and souvenir shops lining the river front and train tracks.

The train ride was a beautiful journey through the mountains, forests and Sacred Valley of the Urubamba Province. At one stage, the train descends very quickly on a clever system of switchback tracks.

Posted by Vanessa Walker at 20:23 No comments:

After Daniel's Jungle Ultra, I joined him in Peru for a week. We based ourselves in Cusco and travelled to different sites around the Urubamba Valley of the Andes. Cusco was the site of the historic capital of the Inca Empire in the 11th-16th centuries and is a curious mix of Inca stonework, Catholic churches, cobbled streets and market places.


Posted by Vanessa Walker at 19:56 No comments:

Daniel ran 230km in the Jungle Ultra in the Amazon Jungle in Peru and he won in a time of 27:01:20! It is an incredibly tough race and very different terrain for Daniel. He had to battle mud, vines, bamboo, critters and 70 river crossings to get to the finish line. But he finished in style - dirty, smelly and very, very happy!


Posted by Vanessa Walker at 18:24 No comments: