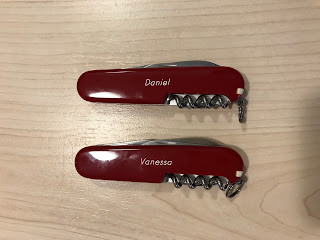 We took a two-week spring break to visit our families in South Africa for Easter. I headed to Southbroom where I caught up with my parents and their new border collie puppies, Jinx and Jess. My brother, Debby and their daughter Penelope flew out and I got to meet my darling niece for the first time! She is perfect :)

We visited the Oribi Gorge Nature Reserve for a day, where we saw zebra, wildebeest, bontebok and impala. Oribi Gorge is a canyon in southern Kwa-Zulu Natal, cut by the Mzimkulwana River. We bravely crossed the suspension bridge on quite a windy day, enjoying the spectacular views over the gorge 400m below us.

It was a lovely family trip and a wonderful catch-up with everyone from around the world.
Posted by Vanessa Walker at 16:13 No comments:

Spring in Switzerland is beautiful, full of rejuvenation of life and spirit. We love seeing the new growth and flowers appearing around our village and on the trails at this time of year.

Posted by Vanessa Walker at 16:16 No comments:

We didn't have great snowfall this winter, but I bought my first pair of skis and ski boots and I was determined to hit the slopes in style. I managed to get in some skiing in the Portes du Soleil, first on the annual school ski camp at Champoussin and surrounds. The sun was out everyday, but it meant that the snow melted each day and froze at night which made for icy conditions on the pistes.


Later in the season I went back to the Portes du Soleil with some friends, this time to Champéry. For the first time ever, I skied across an international border, from Switzerland into France! The only difference was that the prices were in euros :) We also took a chairlift to the top of the "Swiss Wall", the hardest slope in Switzerland, but I chose to descend safely on the chairlift. Maybe next year...

To finish the season, I went with my friend Scott to a resort closer to home: La Dôle in the Jura. Daniel and I have been hiking here in summer and it's always interesting to see the landscape in its winter colours. I don't recognise it at all! The conditions were a little slushy, but I did some proper off-piste skiing for the first time and it was good to end the season feeling confident on my skis. Unfortunately, on this trip I fell of a chair lift for the first time, did an embarrassing face plant at the top of the slope, and they had to stop the lift to get me out the way. Fortunately the only thing hurt was my pride so we were able to keep skiing!


Posted by Vanessa Walker at 18:26 No comments:

Ooh là là, we went to Paris! Daniel's folks came to France for two weeks and they ended their trip in the capital, so we caught the TGV from Geneva and arrived in three hours. Très cool! 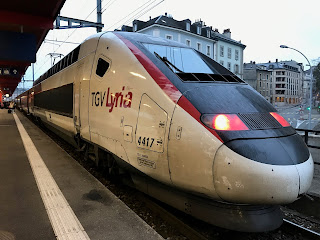 It was a trip down memory lane for us, as Daniel and I went to Paris in the summer of 2007. We revisited many of the same sites and enjoyed a couple of "Before and After" photos. This time we spoke more French than last time, but the Parisian accents and attitudes are hard to deal with...


We managed to fit in an action-packed sightseeing schedule, traipsing from the Moulin Rouge up to Montmartre, and from Notre Dame along the Seine to the Eiffel Tower, Arc de Triomphe and the Louvre. We also squeezed in a visit to Versailles - it was magnificent! Here are a few of the highlights:

Posted by Vanessa Walker at 07:41 No comments:

Each year when the snow arrives, it's cause to celebrate. This year, Daniel woke me up early one Saturday to show me the soft, quiet snow that had fallen over night and transformed our village.


Posted by Vanessa Walker at 18:10 No comments: