Our last tour in the desert was to the Valley of the Moon, 13km west of San Pedro. The valley is so-named because its stark landscape resembles the surface of the moon. It is famous for its sweeping sand dunes, salt caves, natural amphithetres and various stone and sand formations which have been carved by wind and water. Our first stop was at the Tres Marias, a natural rock structure which apparently looks like three praying women...

We climbed up the Duna Mayor, the highest dune in the valley, for great views over the valley and the Andean peaks and volcanoes.


The Valley of the Moon is considered one of the driest places on earth. On our way out, we stopped at a bright white section of salt. It used to be covered in dirt and sand, but thanks to the freak rain two weeks ago the ground has been cleaned and the salt crystals are gleaming. 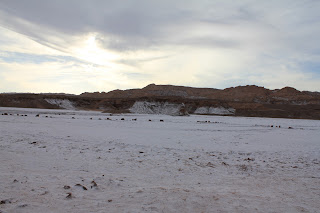 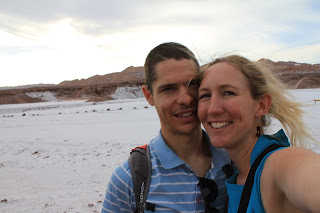 Our last stop was to watch the sunset in the Cordillera de la Sal (salt mountain range). As ever, it was a spectacular blend of colours and a beautiful way to finish off our sightseeing in the desert. 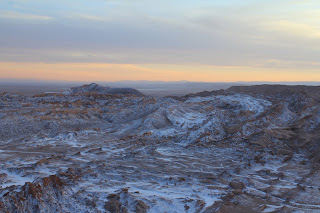