Our first introduction to ’s gastronomic fare was a plate of tofu dumplings stuffed with bean curd. Open-minded as we were, it was a tall order to enjoy beans with every meal, even if they were disguised in a purple gelatine substance or as a soft pink fish… 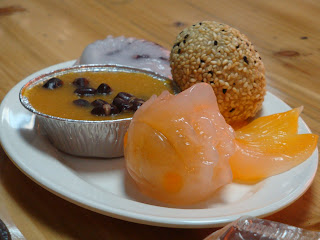 Daniel’s cousin Dave treated us to a range of Asian cuisine, and we came away with fond memories of pho, soft-shelled crabs and Peking duck pancakes. Not even the somewhat twisted allure of a whole duck strung up in a shop window could deter us from these hoisin delicacies, especially when they were washed down with Tsing Tao beer. 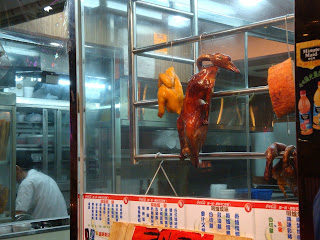 The seafood in is amazing (although often imported due to the high sea pollution) and we enjoyed various crab, prawn and fish dishes. We did not succumb to selecting our own lunch from the tanks outside the restaurants; although the menu was spectacular, we drew the line at eel and stingray! Dried fish was also a no-go, as the stench alone was enough to put Chub-Chubs off his chocolate cake. 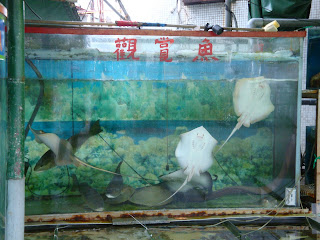 Local delicacies can pose a threat to any unsuspecting visitor, and Daniel was no exception. He suffered the welcome tequila shot in silence, but grimaced as he choked down a nibble of chicken’s feet. He also got a surprise as his freshly-caught squid deposited its black ink all over his hand. However, he got his revenge when the deckhands fried up the squid for dinner. The real challenge was the pepper dish which numbed Daniel’s mouth in a matter of seconds. A pity his taste buds weren’t killed before the chicken feet arrived! 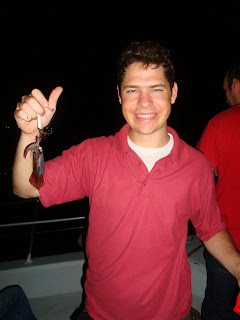