Daniel and I are enjoying a summer of exploring. We are checking out the local sites and trails in our canton, and yesterday we completed the Toblerone Trail (spoiler: no chocolate involved!). We caught a small mountain train up to the village of Bassins in the foothills of the Jura for the start of the trail and ended up in Prangins on the shores of the lake.

The Toblerone Trail follows a 10km long defensive line made up of triangular concrete blocks which were built in WWII from the Jura mountains down to Lake Geneva. These blocks are similar in shape to the chocolate bar Toblerone, hence the name, but were constructed for a more serious purpose: to prevent tank invasions. There are 2,700 blocks along the line and each block weighs in at between 9-16 tonnes.

These lines of defensive blocks can be found all over Switzerland, but are predominantly located in border areas. Due to their location from the Jura to the Lake, Switzerland was essentially saying that Geneva, surrounded on three sides by occupied France, was expendable... The blocks used to extend 50m into the lake to prevent an amphibious assault on Switzerland.

The line has been left to nature since its construction and it was decided to keep the blocks intact and make a hiking trail along their route, the Sentier des Toblerones. They are now covered in moss and ivy and look part of the natural forest. 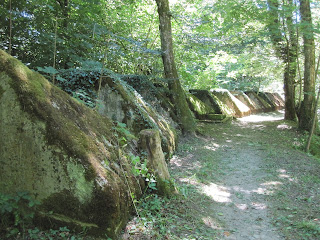 The trail itself is beautiful as the blocks follow the natural barrier of the Promenthouse-Sérine valley along the course of three rivers. We found a perfect spot for a picnic lunch a few kilometers into our 20km walk and enjoyed the rivers, mountain views and forest trails.

The line was built along twelve fortresses, two of which have been restored to their original appearance. One is the Villa Rose which was built in 1940. It has false windows and 2.5m thick walls. The ground floor consisted of several gun emplacements and the basement was used as the sleeping and eating quarters for the troops stationed there. We are waiting for an appointment to visit inside the villa.